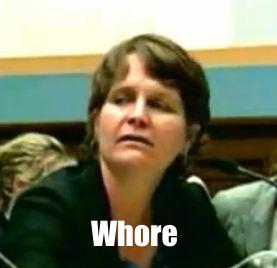 Someone asked that Liz gets the Jim Buckmaster treatment so there it is.

Speaking of Backpage, Washington and lawsuits, because we were you know, three teenage girls from Washington State are suing the Village Voice Media owned Backpage.com. The suit alleges that Backpage did little or nothing to prevent the girls from being sold for sex on their website. Basically Backpage has a button that says ‘click if you’re 18’. Yeah, that works. Two of the girls suing were 13 when they were sold on Backpage, the other was 15.

One of their pimps I’ve blogged about before. Baruti Hopson found the 15-year-old girl as a runaway before turning her out on Backpage. He raped her and kept all her money keeping her in sexual slavery to him.

Of course no lawsuit involving Backpage wouldn’t be complete without their head legal weasel and corporate whore, Liz McDougall chiming in. Settle in folks. It’s a long one.

I wonder if she offered sympathy while counting the money she made from Backpage that was made off of these girls? But I digress…

“The stories of the girls identified in the complaint are tragedies. However, the commercial sex exploitation of children is an extremely complex problem on the streets and online, and it must be fought intelligently.

“Backpage.com is at the forefront of fighting it intelligently online with a triple-tier prevention system and an unparalleled law enforcement support system.”

It’s not complex at all. If Backpage shuts down the adult section it will decrease the number of women and children being trafficked nationwide. That was seen when craigslist shut down their erotic services section. As far as your triple layered prevention cake, it’s a lie. (See what I did there.) Joking aside my site is a testament to the fact their so-called preventions aren’t preventing shit. As far as your law enforcement support system being unparalleled I call bullshit on that as well because your system seems to be letting the cops handle all the pimps and sex traffickers while VVM props up a dying print industry on the victims of trafficking.

She finishes up by saying…

McDougall, attorney for Backpage, said shutting down the website won’t fix the problem.

“Unless the Internet is wholly shut down, the end result of the current strategy will be that our children are advertised through offshore websites who do not endeavor to prevent such activity,” she wrote.

Ah yes, the mystical ‘underground’ I keep hearing about. If it’s underground that means it’s not as prevalent in mainstream society as it is now. That would mean that there would be fewer victims of sex trafficking than there are now. Besides, law enforcement has plenty of experience in dealing with the underground. As for these ‘offshore sites’ she keeps referring to well thanks for giving the traffickers ideas and those sites wouldn’t have near the reach and publicity that Backpage does now.

At what point did you start believing your own lies Liz?