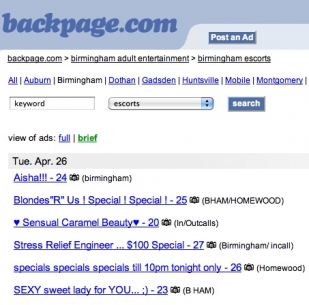 Back in January the FBI received a tip that an ad on Backpage for Saginaw, Michigan was for a 14-year-old girl. When investigators conducted a sting to find the girl they also arrested 20-year-old Desiree Poole for allegedly prostituting the girl on Backpage.

Poole allegedly tried using the excuse that she thought the girl was 16. Now, where have we heard that kind of defense before? Oh, that’s right usually from sexual predators who get caught. It seems that pimps/traffickers and child predators tend to use the same kind of tactics to groom their victims.

Poole is looking at 10 years behind bars on federal child sex trafficking charges and no one at Backpage is facing any kind of repercussions whatsoever.